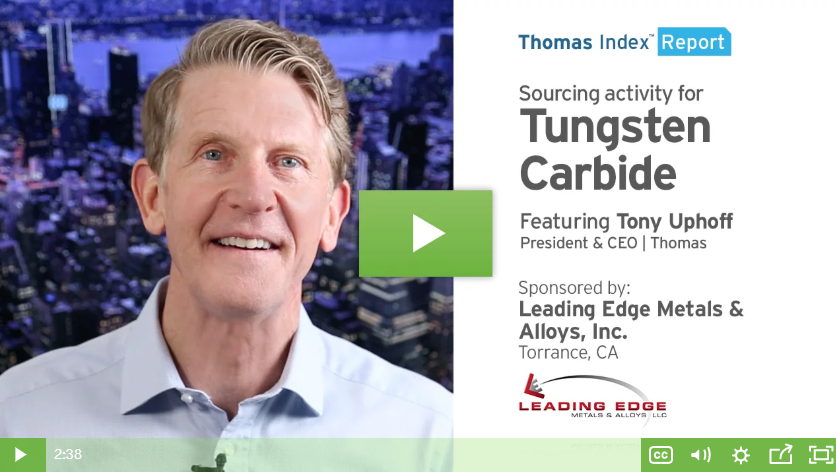 “This Thomas Index Report is sponsored by Leading Edge Metals and Alloys, a leader in providing high-quality and hard-to-find specialty metals and alloys.

Our firmographic buyer data shows that the top two industries driving this trend are industrial equipment manufacturing, and government and military.

As a compound material that can be used to create cutting tools with twice the hardness of steel, Tungsten Carbide is widely used in fields such as construction, mining, and manufacturing. Often referred to as simply “carbide,” tungsten carbide revolutionized manufacturing’s ability to machine complex parts out of steel, titanium, cast iron, and other metals.

Due to its durability, high-precision cutting capabilities, and its superior ability to withstand high temperatures, metalworking, and machine shops rely on Tungsten Carbide Cutting Tools for increased productivity and efficiency, and lower production costs.

As U.S. manufacturing has seen 118 consecutive months of growth, it should come as no surprise that we’re seeing increased sourcing activity for the material that is literally on the cutting edge of that growth.

In fact, our data shows that sourcing activity is also up 17%, year over year, in CNC Machining and Precision Machining – core manufacturing processes that use machines with Tungsten Carbide cutting tools.

Another area that is likely to be driving the demand for Tungsten Carbide is U.S. military spending, which is set to grow for a fifth consecutive year in 2020, reaching near-historic highs.

Tungsten Carbide is often used in military armaments, particularly in armor-piercing rounds – not only for its tensile strength and hardness but for its eco-friendliness as opposed to environmentally-harmful depleted uranium. That toxic and somewhat radioactive material has long been used in armor-piercing ammunition but is starting to be phased out.

As military spending and the U.S. manufacturing sector continue to grow, we expect sourcing for Tungsten Carbide to remain strong.”